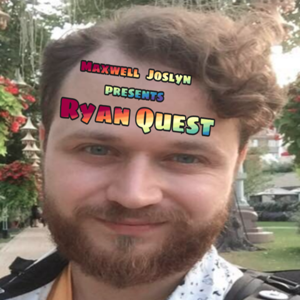 Play Ryan Quest in your browser.

From 2018-10-01 to 2019-02-01, I created an adventure videogame based on the life of my friend Ryan Wright, an American who is studying game design in Copenhagen. The game has been enjoyed by all who've played it, including the titular Ryan.

The game is usually played by one person, but friends have found it even more entertaining to play as a group: everyone suggests things to try next, and one person does the typing.

Playing Ryan Quest in the Browser

The easiest way to go on a Ryan Quest is to play the game online, in your web browser. Please note: when playing online, you will lose your progress once you close the browser tab, even if you use the "save" and "restore" commands. Unfortunately, that particular code is out of my hands; fortunately, most players beat the game in one sitting!

Playing Ryan Quest on Your Computer

Instead of playing online, you can also download the game (2.7 MB) to play on your computer. You wil also need a program called an interpreter to load and run the game file for you. On Mac or Linux, I recommend the the Zoom interpreter. On Windows, I recommend Glulxe or Gargoyle. Other options can be found by searching the Web for "interactive fiction interpreters."

If you seem to be stuck on the title screen, make sure to click "More" or press the spacebar to scroll down all the way. If that's not enough to help you get started, keep reading!

After the introduction, you'll see the command prompt symbol, which looks like this:

The prompt is where you type in the action you want Ryan to take in the game world. An interactive fiction game plays out like a conversation between you and the computer, which translates your commands into instructions for Ryan.

This old-school adventure game is played by moving from area to area, examining items, talking to people, and manipulating both to try and gain points. For example, in the first area of the game (the apartment), there is a loaf of bread on the shelf. If you want to see details about the bread, you can type "examine bread" after the prompt, as follows.

Your command is submitted when you press enter. Examining the bread, as you have done here, will print out the bread's description, right below the command you typed.

Notice how the command prompt reappears after the description of the bread: the game "took its turn" by describing what you did. Afterwards, you can take another turn. Ryan Quest is built to recognize many synonyms, so you have leeway in how you give your instructions. All of these are equivalent:

Why not have a snack?

Proceed on this principle, and you will do just fine.

Here is, I believe, a complete vocabulary of all the commands needed to play the game to the end1. Please email me if you know of another command which is required to win, but keep in mind that commands have synonyms (e.g. "take" and "get" do the same thing.)

north/n, south/s, up/u, inside/in, and so on
Move to a new area
open
close
get/take/pick up
Carry something with you
drop
Put down something you have with you
give something to someone
ask someone about something
buy something
dirs/directions
Lists the other places you can get to from your current location
ride
show
examine
wear/put on
Put on clothing or other wearable item
take off
Take the clothing/wearable item off again
put something in or on something else
push or pull

For a mini-tutorial, try typing in each of the following commands in order2. When you type each one into the game, pay attention to how the game responds, and you'll be well-equipped to go on a Ryan Quest.

The game you know as Ryan Quest began development in October 2018 ... but my first attempt at creating a Ryan Quest game came a few months earlier, in the summer. Ryan Quest as it currently exists shares only thematic elements with this prototype. Here is a screenshot.