I'm so happy to announce that The Drongo's circulation has grown to 44 subscribers. No paltry number, that. We're nearly at the big Five-Oh! 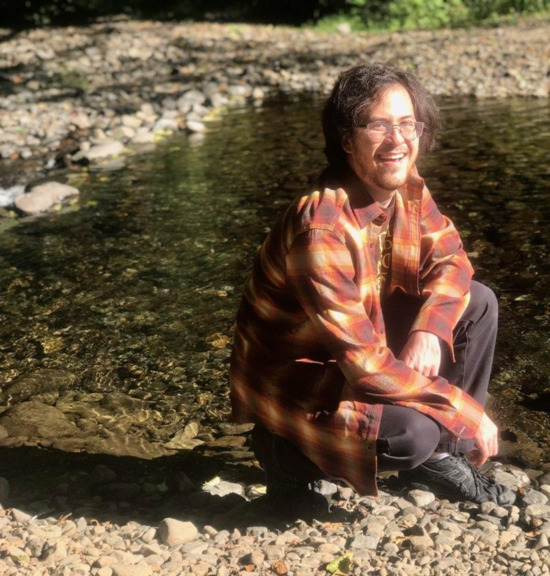 The Drongo: This issue's interview guest is Larry Drui, a multi-talented performer and playwright who always has something intriguing to say. Tell us about yourself, Larry.

Larry Drui: Originally born and raised in Hawai'i, in 2012 I moved to Portland, OR, to pursue a theater degree at Reed College. I am hapa (half-Japanese, half-white.) I tend to make spreadsheets about craft beer, and I also have a penchant for wordplay.

The Drongo: I make good use of my racial bonus to bagel-eating, and I expect this interview will be one hell of a pleasant exchange. I brought you this:

The Drongo: Larry, you're a natural organizer. I know firsthand that you govern your videogame play schedule with a color-coded spreadsheet, and now you tell us you've got a beer spreadsheet, too.

Larry Drui: I've always enjoyed organizing and planning things! It's one of many methods I use to not only ground myself, but also quell my Anxiety™ and occupy my time. It's comforting to me to be able to organize the world around me, to consolidate key information to function more efficiently, and to maintain order when my mental health does not normally permit me to do so.

To get midkey poetic here for a second, it is a constant struggle against -- but also a tacit acknowledgement of -- the natural entropy of the universe.

The Drongo: Would you share with us your entropy-fighting hobby spreadsheets? Ideally, the videogames one.

Larry Drui: I have not updated my videogame spreadsheet since ... before I composed a single word of my senior thesis [editor's note: i.e. since late 2015.]

However! I have more recently been updating a spreadsheet of television shows that I intend on watching. It is one of my most colorful spreadsheets to date.

Larry Drui: Please excuse any errors or oversights if some of the data is no longer accurate; I can only update it so frequently.

The Drongo: The "Quantified Self" community is formed of people who track all kinds of personal activities to learn more about their own lives and habits. You haven't used that particular term to describe your data-management practice, but this kind of spreadsheet makes you that kind of person.

Since your kooky creativity comes out even in the meta-hobby of managing and analyzing other hobbies, it's no surprise that you've done a lot of artistic work. You've performed as a dancer, an actor, and a voice-over artist. You've also written plays.

What is it about each of these art forms that inspires your creativity, and how have you expressed yourself through them?

Larry Drui: That's an excellent question! Each form of expression you've listed is very different, but each one has, at its core, a community of people who are trying to communicate and connect with one another.

I learned an awful lot of dance styles in high school, including ballet, jazz, hip hop, and musical theater. However, I enjoyed tap the most (1) for the way it requires careful coordination and timing of the body, (2) for its focus on a large ensemble, at least in the numbers I performed, and (3) because tap shoes go brrr. Honestly, who among us has watched "Moses Supposes" from Singin' in the Rain and hasn't had gay thoughts?

Larry Drui: Going back to the origins of the theater, ritual is a quintessential part of performance, and routine and ritual are naturally similar. I very much enjoy the theatrical routine of rehearsing and rehearsing, then finally all coming together to share, with an audience, the collective experience of months of hard work. The same is equally true for voice acting, although voice acting has a much higher emphasis on cadence and rhythm, given the inability to use the body for visual cues.

Finally, writing is something I very much enjoy, but let's be real: it's just a cleverly disguised ruse to be able to make people listen to my shitty puns. Did you know I once wrote an entire play about corn puns called Prop Corn? It was very ... cheesy.

The Drongo: I did not know that, but it's exactly what I'd expect from you.

By the way, readers: Larry agreed to share part of a play with The Drongo. Read an excerpt from the script of Call to Me at the link below, and see for yourself how Larry writes for the stage.

Larry, do you perceive any connection between your continual involvement in theater and dance, and your penchant for computer gaming?

Larry Drui: Other than the fact that I played Pokemon Blue on an emulator during a dress rehearsal, not a whole lot. Well, I mean, my dance training definitely helps with rhythm games. I haven't played Dance Dance Revolution in well over a decade, but I will kick anyone's ass -- hell, even my own ass -- at it. (ง'̀-'́)ง(ง'̀-'́)ง Fite me in an Applebee's parking lot (ง'̀-'́)ง(ง'̀-'́)ง

The Drongo: Somehow I feel that would violate your terms of employment, but I'll defer to your intimate knowledge of the IRS Employee Manual.

Speaking of which: most people would consider working for the IRS to be hellaciously boring, but you seem to enjoy it. Is that true? What is your job like, and what makes it worthwhile?

Larry Drui: It's a great place to work! Good pay, fantastic benefits, and a mountain of job security.

I'm sure I, or any Reedie you ask, will state that they, to at least some extent, enjoy research. Half of my job is researching accounts: any person who's ever filed a tax return has an "account" with the IRS, which is a fancy way of saying that certain events -- like a tax return being filed, or a refund going out, or an adjustment being made -- are recorded on a computer. The other half of the job is customer service, which is a kind of performance!

I staff the phone lines. When you call up asking about your refund, I'm the person you get. I have also been trained to answer basic tax law questions (e.g. "Is X type of income taxable?" or "Am I eligible for X?"), schedule appointments at local Taxpayer Assistance Center offices around the country, and assist tax specialists with account questions for their clients.

I occasionally have to adjust accounts after researching them. For example, say you try to claim a dependent on your return, but the Social Security Number (SSN) you enter is off by a single digit. Until that's fixed, the IRS will disallow certain tax benefits on your return. I would be able to correct the transposed digits, and adjust the tax return to regain those benefits.

This job is honestly a culmination of all of my past experiences. It allows me to research, and get that li'l bit of dopamine from Sherlock-ing my way to the correct answer. It also allows me to improvise while finding the best way to communicate information to people while on calls. In fact, I even voluntarily worked a total of 514 hours of overtime last year -- because it's so lucrative, and because, luckily, it doesn't make me want to bash my head against a wall of dicks & bricks!

If any drongos out there need tax assistance , I can't promise I can answer your question fully, but I'll do my darnedest, so feel free to reach out! (Just don't ask where to send your quarterly estimated Drongo payments; that's a question better posed to one Maxwell Joslyn.)

The Drongo: It seems that you've found a perspective on your job which lets you apply the work ethic and pursuit of excellence which you acquired from theater and dance rehearsals. If that motivates you enough to work 25% more hours than a typical job, I call that points scored for the liberal-arts model of education.

Let's conclude by returning to our starting point: the pleasures of media. Could you please recommend us your favorite art pieces -- perhaps from a medium in which you've performed?

Larry Drui: One of my favorite audio plays that I had the pleasure of coming across in my thesis research was this radio drama adaptation of Harlan Ellison's short story "I Have No Mouth and I Must Scream." Very elegantly written and brilliantly acted!

The Drongo: Being a fan of the original story, I leaped on your recommendation. What do you know, Harlan Ellison plays the role of the murderous computer AM! That's perfect. Don't miss this, drongos.

Larry Drui: As for visual art, I legitimately considered the question for about an hour before I settled on this image.

Larry Drui: Okay, but genuinely, and I mean this with the utmost sincerity: I have not thought about any image more in the past five years of my life than this one. And if that ain't art, then light a firecracker in my butthole and call me Amelia Bedelia because I apparently don't know what art is.

The Drongo: Thank you for putting The Drongo on the hook to publish this little-known masterpiece. Of all the notes on which we might have ended, none could have surpassed the sweetness of Prince Eric's flute.

That's all for today! Thanks for being a great sport, Larry, and I hope some Drongo fans get in touch with you after this interview. Readers, you can contact Larry by email at scholarry@gmail.com.

If you liked this interview, please share it on social media:

Next month, join The Drongo for our ninth interview. You'll meet one Alexi Caracotsios, a polyglot who's studied Spanish, Chinese, Russian, Kyrghyz, and Uyghur as part of a quest to experience life to the fullest.