The day has come! Welcome, one and all, to the first interview with The Drongo.

Before I introduce our guest, a celebratory note: delightful drongos have completed enough interviews for me to release one every two weeks through late February March. Even more are under way!

The official drongometer readout is mere millimeters from "Maximum Drong." There's no better time to subscribe. 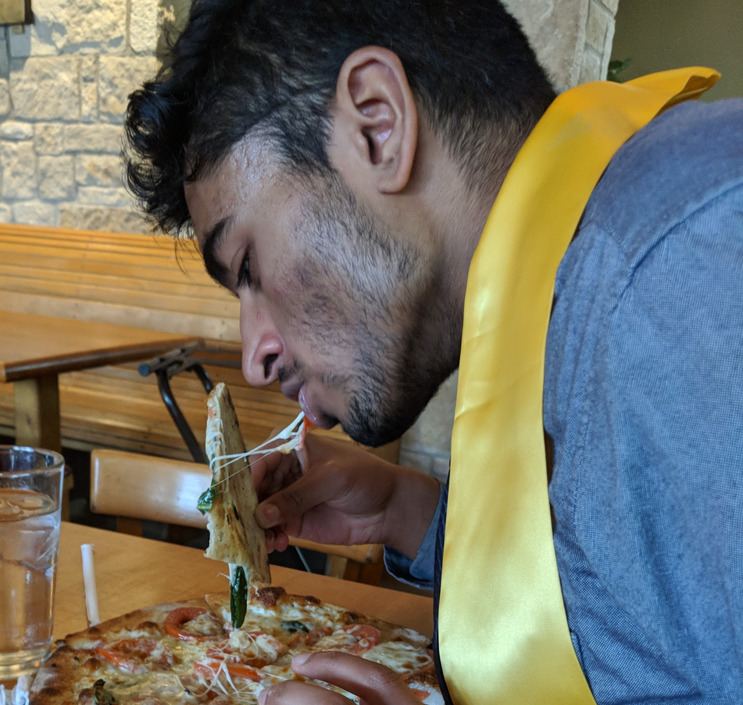 Please join me in welcoming Karthik to the stage. For being the first interview guest, his courage is matched only by his drongitude. I can also vouch for his sense of humor. Karthik, please introduce yourself to the audience.

Yo, I'm Karthik. I started off as this ultra-rationalist, science-worshipping tech enthusiast. I programmed for Facebook hoping to get overpaid to rest and vest until I could retire to a beach hut in Hawaii and never work again.

Fortunately, a series of weird health issues thwarted my plans and forced me to re-examine my materialist view of my body and the world. Long story short, I flipped my whole belief system and quit my job to dive into the awe-inspiring world of astrologers, gurus, energy healers, etc.

Today I write, practice ayurveda, and mine the vast caves of ancient knowledge.

First off, let's get situated. Could you please introduce us to ayurveda?

After that, could you also touch on the other areas of healing, occultism, and religion which you study, and discuss your rationale and methods for combining them with ayurveda? Feel free to get historical.

Ayurveda is the ancient Indian science of attaining perfect physical and mental health.

In western medicine, we get biological knowledge with microscopes and look at how cells and proteins interact or whatever, and then use that to make a hypothesis for how to cure disease. Ayurveda takes an inward approach. Sages just meditated a bunch, prayed to the God of Ayurveda for knowledge, introspected, felt their own nervous systems and organs -- and then magically came out the other side with the cures. It sounds crazy, but the cures have worked for thousands of years, and are now being corroborated through the western lens as well.

All traditional medicine systems share the belief that the medical qualities of a food can be derived simply from its look, taste, and texture. No lab needed. An example concept in ayurveda is the twenty "qualities" of edible substances. The qualities of oatmeal are "dull," "unctuous," and "heavy" (three of the twenty qualities.) So if you're "light" (underweight) and "dry," you should eat oatmeal. That's a super basic example, but they have different kinds of these intuitive, simple, beautiful abstractions (6 tastes, 5 elements, 7 tissues) that come together and are applied to heal any disease.

Unfortunately, ayurveda today is much different than when it started. It takes a lot of spiritual intuition to really learn and practice ayurveda well. Back in the day, practitioners could just feel your pulse for a minute and know exactly what was out of balance in your body. There was a legendary doctor who could cure any disease under the sun, with the same three herbs given in different, precise ratios, because he had some special gifts.

So you can't really just go to LearnAyurveda.com and expect to be a good healer. Even the formal colleges are fairly BS. So, these days, I'm more into developing my intuition and sensitivity so I can taste an herb and just "know" what it does myself (this concept is called Divya Drishti.) And of course, this will help me with everything, not just ayurveda.

For example, the scriptures say if you really meditate on the moon, you'll attain the knowledge of all the movements of the stars. That's awesome, right? No math or reading required. The mystic path definitely has a high ROI. I know that sounds insane and woo-woo, but I have a strong faith that it's in the realm of possibilities.

And even science aside, I don't rely on my dumb, flip-flopping brain and limited rationality to make choices for me. I want my heart to take the lead. I want to just know "the right thing to do" in all cases. So yeah, part of what I'm focusing on is developing my ability to ascertain knowledge through spiritual practices. I haven't made much progress yet 😂, but I'll let you know when I can read books with my eyes closed.

When you achieve that, I want to be the first to know!

Now let's get a detailed look at your practices.

Pick a specific ritual technique of high importance, or centrality in your beliefs. Please explain its goal, then lay out allllll the preparations you make for it, and the exact steps you take during it. Don't hold back: use as much specialized terminology as you need to explain timing, bodily positions and movements, mental states, "ingredients" and other prerequisites, everything.

The way you asked that question I feel like you imagine me sacrificing goats and casting spells and what not 😂. Unfortunately I'm not at that level yet. My practices are pretty boring. Aesthetically, at least.

The central practice of my life is Sadhguru's Shambhavi Mahamudra, which I don't think I'm allowed to explain, so I would just encourage everyone to check it out. There are studies on it, if that's your thing, but keep in mind these studies only touch on physically-observable benefits of the practice, which is a small dimension of its overall purpose.

Something I've been experimenting with recently that I'll go into is using specific seed mantras (one-syllable chants) to change my emotional state. Speaking different words will impact the body in different ways (aside: "spell," like "wizard spell," is derived from "spelling!") Different sounds sound different because they're produced in, or resonate in, different sections of the body, stimulating different nerves, organs, energy centers, and producing different physical and emotional states.

If you sit still and relaxed, hands in prayer position, and slowly chant the word "Kleem" -- really get into it, how a shaman would -- you can feel the "kl" move up and down in your throat, the "ee" vibrate in your chest, and the "mmmm" vibrate in your chest and head. This combination is said to create love, joy, and ecstasy. Or, according to YouTube comments, can make the ex you still love call you...

I'm hoping one day these mantras will replace drugs. I figure, when you take something like MDMA, it's not serotonin in a pill. MDMA just agonizes serotonin receptors, pushing your body to make more serotonin on its own. Also, I figure, yogis and people like Wim Hof have insane control processes (e.g. serotonin regulation) that most of us believe are unconscious and off limits. So, I don't think making more serotonin sans drugs is off limits. The future I want to live in is one where we all hold hands and chant Kleem (or Ram, a more "Red Bull" type of mantra) at the pregame.

What role does empiricism play in your religious practice or rituals?

Is it more important to trust and faithfully follow tradition, or is experimentation a requirement for understanding? If tradition, how do you know the prescribed costs/preparations are truly required? If experiment, how do you recognize success?

For mysticism, you need faith in order to experiment. Unlike conventional scientific experiments, your mind, thoughts, and emotions play a big role in the outcome of the experiment, like how in quantum physics the observer affects the observed. You can't do a ritual mechanically, without the mindset. It won't work, because most rituals have positive will and thought power as a requirement.

Of course, this leaves mysticism and theology open to being dismissed as one big placebo. I find that unfair, for reasons I've written about here.

You can start with something where faith isn't needed. Drinking turmeric tea for a cold, maybe. If it works, you'd think, "Wow, this stuff works. That's kinda cool. I wonder what else works!" So you go a little weirder -- maybe breathing techniques or mantras. And your initial inertia with the tea gives you a positive mindset on the weirder stuff. And if more and more starts to work you build an optimistic faith in the crazier stuff, and faith in the geniuses that somehow came up with all of this.

The scriptures say knowledge is attained by the consensus of 1. personal experience, 2. scriptural reference, and 3. agreement of a living guru. So it's a mix of tradition and experiment. Scriptures and guru, #2 and #3, are where you get the "prescribed costs/preparations."

Recognizing success is hard at first, since the effects are so subtle. It takes faith to keep going. But once you're deep into it, meditation becomes very visceral, tingling, blissful, you start hearing sounds and shit, and you can feel pretty strongly that something cool is happening. But there's also obvious success. Like, for twenty years, since I was a little kid, I'd get sinus infections once every one or two months. My nose is completely fucked. Don't know why -- genetics, maybe. Doctors just told me to take more Nyquil, get a CPAP machine, maybe undergo surgery. But after 6 months of ayurveda and spiritual practices, I stopped getting them completely. It's been 18 months since my last one. That's easy to recognize as success.

That sure sounds successful to me, Karthik. Any last thoughts to share with the audience? This is the bonus round. Anything goes.

If anyone wants to know more about mysticism in general, I highly recommend Inner Engineering by Sadhguru, or for the more scientifically-minded, there's a great talk he has with the neuroscientist David Eaglemen. To read about the seed mantras I mentioned, like Kleem and Ram, there's a great book: Mantra Yoga and Primal Sound. I also occasionally write about it on my blog here.

A thousand and one thanks, Karthik! Your responses were beyond excellent, especially given you had no previous examples to guide you.

To read more from Karthik, you can visit his personal website karthik.is, his blog blog.karthik.is, or his Twitter @kbala444. He's also open to contact and follow-ups at karthikbala444@gmail.com.

You are encouraged to spread this interview, and The Drongo itself, to your friends, SOs, family members, followers, and corona podmates. They can sign up here!