I have typing-induced RSI aggravated by a fall off a bicycle. I've struggled for months with available voice-input software. I've been forced to place nearly all of my personal projects on hold, and I'm uncertain how I will perform a normal job without further degrading my hands.

I will not stand for this. Computers can do anything. My mission in 2021 is to build the best possible no-hands interface for textual work at the computer.

I'm currently seeking funding which would allow my mission to become my job. Failing that, I will at least find mentors to guide me as I create this interface myself.

Hundreds of Thousands of Injuries

It's hard to get a straight answer on how many people suffer injuries that would impair normal use of a keyboard and mouse.

For my purposes here, I'll offer two approximations of a lower bound on potential customers.

Absent other information, I'll assume that the "High Income" subpopulation has bony hand trauma at the same rate as other income brackets. Multiply US population by the ASIR of 210.7/100,000 ...

In 2019, the BLS reported 339,800 cases of workplace injury to the upper extremities (shoulder, arm, wrist, and hand.) Here's an abridged version of a table from their data reporting tool. Workplace injuries alone total ~340,000 cases. How many more happen outside work?

Carpal Tunnel Syndrome is the most well-known repetitive motion/strain injury (RMI/RSI), but there are others, like Cubital Elbow Syndrome, or De Quervain’s Tendosynovitis (inflammation of the thumb tendons, aka "texting thumb.")

However, while RSI is frequently caused by keyboarding and mousing, many other kinds of injury can impair use of those devices.

Look again at the "Upper Extremities" column in the table from the Bureau of Labor Statistics.

Suppose you're injured to the point of being unable to use a keyboard and mouse.

I merely have RSI -- no amputation here -- yet I get piss-poor service from existing voice-input and dictation software. Here are the problems that make existing software feel infuriatingly backward.

Produce the best possible no-hands interface for desktop computing, with a focus on text/document work, and targeted at non-programmers.

The UI must leap out of the screen, guiding the user at every step with context menus. Its behavior will made visible with a display for "currently hearing" and "last recognized" commands.

User will be able to choose from multiple input modalities to accommodate their impairments. This goes beyond speech: there will be gesture commands, as well as low-cost physical tokens (stickers) recognizable by the same video system that recognizes gestures.

There will always be some chance of inaccurate speech-to-text recognition, but with smart design, the frustration of inaccurate recognition can be minimized. Dictation and command modes will be separate, with their own UI affordances. Gestures form a much smaller class than the enormous space of command words, so they can be recognized with higher accuracy. Finally, constant visual feedback will keep the user aware of how the app is interpreting their actions.

One of Many Mockups

Here's a single oh-so-early mockup of some intended UI flows for prose editing. 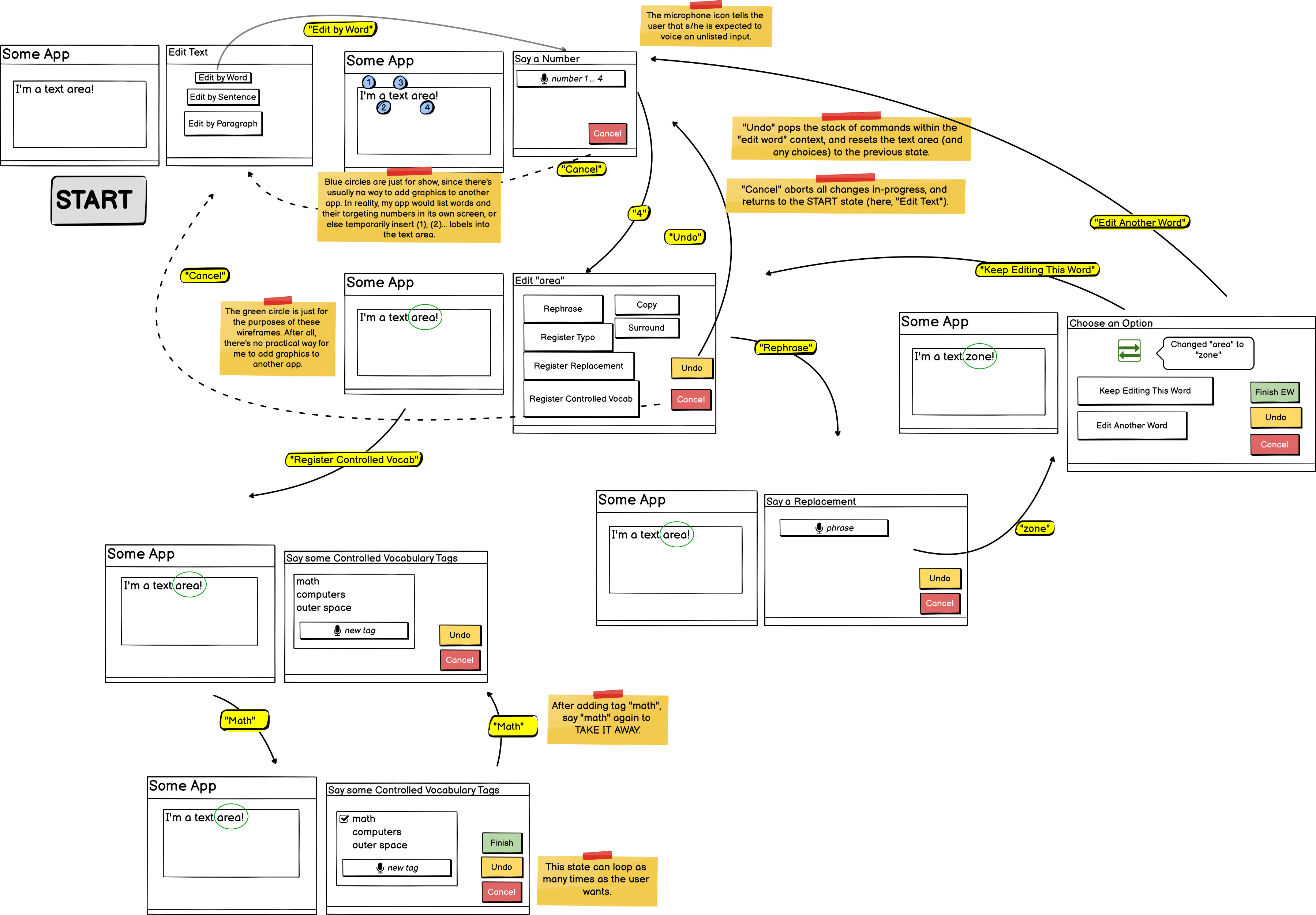 Comparisons to Other Apps